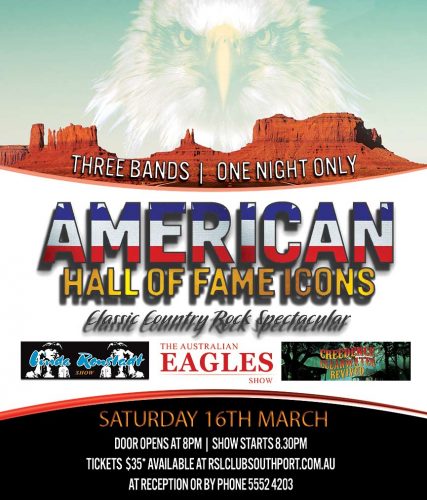 Calling all country rock lovers – the ultimate country rock experience is coming to the Gold Coast this March and it’ll be taking place just minutes away from our Broadwater apartments!

American Hall of Fame Icons ‘Classic Country Rock Spectacular’ is an unmissable treat for all lovers of country rock, featuring three renowned tribute bands delivering the biggest and best hits of three undeniably iconic names in American country rock: the Eagles, Linda Ronstadt, and Creedence Clearwater Revival. Taking the stage will be renowned tribute bands the Australian Eagles Show, the Linda Ronstadt Show and Creedence Clearwater Revived, and you can be sure you won’t leave disappointed!

The Australian Eagles Show is Australia’s most successful Eagles tribute show, offering state-of-the-art lighting and musicianship that will have you thinking you’re watching the original multi-platinum-selling band themselves. The Linda Ronstadt Show stars highly talented performer Angela Ayers, and there are few that sing “Blue Bayou”, “Don’t Know Much” and “You’re No Good” better than her! Last but not least, Creedence Clearwater Revived is currently one of the best tributes to pioneering American country music band Creedence Clearwater Revival, who have enjoyed considerable success performing their world-class tribute show to diehard fans across the globe.

Whether you’re a fan of just one or all three, the Classic Country Rock Spectacular is an experience that will have you singing your favourite country rock classics at the top of your voice! Make sure to be on the Gold Coast on March 16 so you don’t miss it at the RSL Club, just moments away from Pelican Cove.

For an affordable and convenient stay near the RSL Club, just view our Broadwater accommodation at https://www.pelicancove.com.au/apartments